Former World Champion Charles Apthorp of Hayling Island SC, with Alan Green of the National YC on board, eased to victory in the Flying Fifteen East Coast Championship held in Dun Laoghaire at the weekend (Oct 4,5), with four wins from five races.

There was thrilling sailing in brisk winds – Apthorp later said it was the best he has had this year – for the 29 teams taking part in the event, with close contests all through the fleet.

David Gorman and Chris Doorly on the National YC were the only team to trouble the winners on the results sheet, taking first in the final race. Current Irish Champions Andrew McCleery and Colin Dougan of Killyleagh YC placed third.

The Flying Fifteen East Coast Championships hosted by the National Yacht Club and with sponsorship from Kia Motors and Il Palagio (a Tuscan winery owned by Sting and his wife) were a great success at the weekend, with 29 boats competing.

With strong winds, particularly on Saturday, there was plenty of exciting racing and Jack Roy and his team laid excellent testing courses, after which some crews will still be feeling the effect!

On Saturday, three races were held in 18-22 knots of breeze from the west/nw. It was shifty with a choppy sea, but with the tide the beats tended to be one sided throughout the day in all the races. So it was all about getting a good start and good seamanship through the waves to get in to the left side.

Race 1: After the start, the majority of boats went left towards Seapoint into the shallower water. Gorman tacked before the lay line and was looking good but Apthorp went more left and got to the weather mark first, followed closely by Gorman and then Mathews. Strangely for the wind from this direction there were little or no lifts on the port tack. These three opened a good lead and this was the way it stayed to the finish with Creighton & Bridges in fourth and McCleery fifth.

Race 2: It was much the same as race 1 – am after a good start, Apthorp led all the way. Behind him there were changes for the minor places throughout the race with Mathews, Gorman and McCleery crossing the line in that order within inches of each other.

Race 3: The final race of the day was a triangle course. Again it paid to head towards the shore and again Apthorp led the way from Gorman and McCleery. This was the way it stayed to the finish, with McKee fourth and Peter Lawson & Jo Bridges fifth.
On reaching the shore after the three races the well-organised helpers on the slip were a welcome sight, as were the soup and bread rolls. There was an excellent meal provided later in the club but many people went to the Leinster v Munster rugby match.

For Sunday, the forecast was for strong gale force winds to come from the south. There was an early start so it was hoped we would get our racing in before this arrived.

In Race 4 there was a general recall. It got restarted shortly after with the U flag in operation, There was a slight bias at the pin, but as it was shifty it was not necessarily going to pay. Gorman started at the committee boat end which gave him the option to tack on the shifts, this he did and led at the weather mark from Apthorp, Willis and McKee.
On the last run, Gorman went more right, allowing Apthorp to sink low below him and gain ground. Gorman gybed but Apthorp crossed ahead but stayed right, Gorman had more wind and used the waves to finish first. Apthorp was second, which was enough to win the event. Peter Lawson & Jo Bridges came in third, with Brian Willis & Stephen Boyle fourth.

Race 5: Similar to race 4 with shifty conditions, but the wind strength did vary. Most of the boats went out left on starboard. It was close coming in to the weather mark, Apthorp went more left and seemed to gain from the incoming tide, he got in to the weather mark just in front of Gorman, closely followed by Willis, McKee and the main pack of the fleet.
On the second beat, Gorman went right earlier than before, the numbers were good but Apthorp still got to the weather mark first, Gorman chased him downwind but the experienced Apthorp held on to win by a narrow margin. McKee was third, with McCleery gaining a few spots on the run to be fourth in the race and third overall.

At the prize-giving, local class captain Nicky Matthews thanked the sponsors and the many volunteers including the PRO and his team, Sandra Moore and the race office team, the beach master Ian Meldon and his team, and her local committee who helped make the regatta a success.

It was the last regatta in the season and the class ranking for the season 2014 is complete now, with McCleery in first place, Gorman second and McKee in third place. 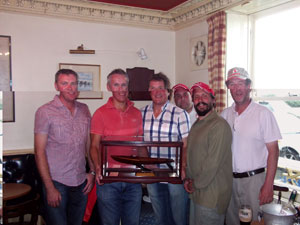 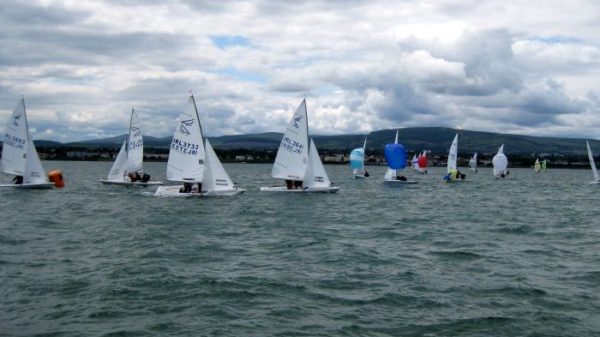 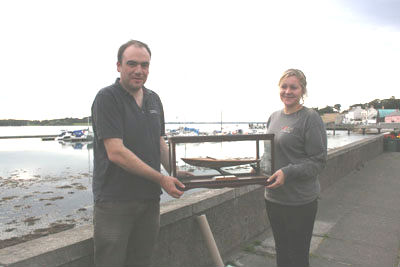