The National Yacht Club duo had five straight wins in the 23-boat fleet, which meant they had the luxury of not having to sail the final race.

Conditions were just about ideal for the six-race event, which got underway on the Friday afternoon when Lavery and O’Brien stamped their authority on the fleet from the outset by winning the opening race with plenty to spare.

The rest of the weekend proved to be a similar story, as they either led right away from the starting line, or else worked their way to the front with effortless ease. For most of the time it seemed as if they had an extra gear.

The local challenge was led by Brian McKee and Stephen Martin, from the hosts, Strangford Lough Yacht Club. They finished runners-up with a sequence of three second places and two third places.

2012 Champions John Lavery and David O’Brien with other trophy winners at the Championship of Ireland event at Strangford Lough YC. Picture by Marcus Crichton

In third place were Roger Chamberlain and Charlie Horder, also from Strangford Lough Yacht Club, and in fourth place were Andrew McCleery and Colin Dougan, from Killyleagh YC. Peter Lawson and Jo Bridges, from Portaferry, stormed into fifth place after finishing third and second respectively in the final two races.

Brothers Alistair and Mark Fletcher, from Strangford Lough Yacht Club, won the silver fleet and the bronze category went to the father-and-son pairing of Niall and Chris Eames.

The championships coincided with the 60th anniversary of the Flying Fifteen class in Strangford Lough. Peter Browne, who with his brother Max built the first Flying Fifteen in Ireland, gave an entertaining and informative talk on the development of the class at a dinner in the club on Friday night. Their boat, Witch of Nendrum, was first sailed at Strangford Regatta in 1952. 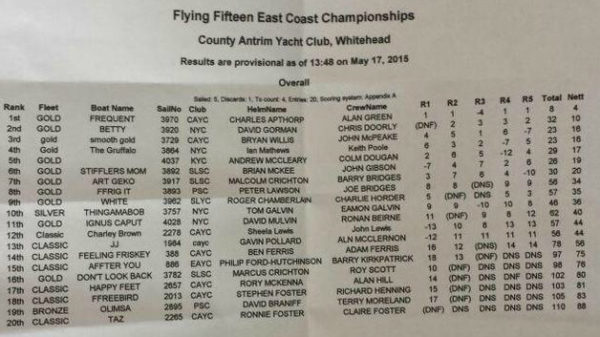