On Saturday 12th and Sunday, 13th June, Portaferry Sailing Club hosted the Flying Fifteen Association of Ireland (FFAI) Northern Championships supported by Ards Tourism. There was a great turnout of 25 boats, seven of which travelled up from the National Yacht Club in Dun Laoghaire, who enjoyed a challenging four-race series. Kieran Gilmore reports

Day 2 saw the wind originally coming out of the south-west but continually fluctuating, and as a result John Lavery and David O’Brien (NYC) came home well ahead of the fleet in Race 3, with Roger Chamberlain and Jason Scammell (SLYC) second and Andrew McCleary and Colin Dougan third.

The wind then moved round to the north-west and practically died away and this contributed to a general recall at the start of Race 4. Eventually, however, the wind came again out of the north with a vengeance and with it torrential rain and the OOD John McAlea, who had used a gibe mark in the first three races, opted for a windward-leeward course for this final race.

The wind was so strong it caused some hairy moments at the leeward mark, but Darren Martin and Simon Murray were again victorious, with Gerry Reilly and Peter Quail second and Brian McKee and Stephen Martin third.

All the competitors had a great weekend on the water and enjoyed good food and craic in PSC clubhouse.

The committee of Portaferry Sailing Club wish to extend their thanks to all the competitors, to Ards Borough Council, to the Officer of the Day John McAlea and his team, especially Mark Bridges and Don Bridges who supplied the committee boat and windward mark boat, to the Routen Wheel Restaurant, and to all those who gave of their time to ensure a successful and enjoyable event. 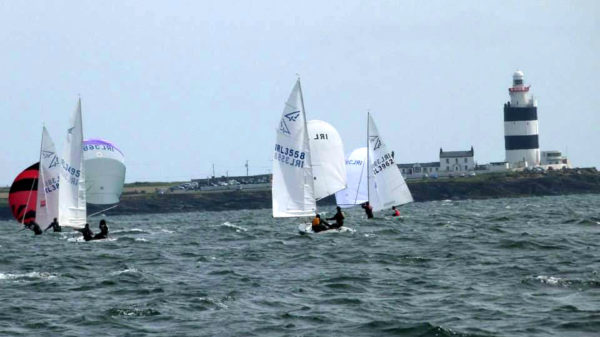 Dave and Chris pick up their Sailor of the Month award

Stray thoughts on the Northerns