The South Coast Championship event was held in Dun Laoghaire, at the NYC, in conjunction with the Royal Alfred Yacht Club’s Baily Bowl , on the weekend of 15-16 June 2010. This report by Andy Martin.

There were two names on the tip of every crew’s curses this weekend. John Lavery, and David O’Brien. Every time a helm asked as they headed into the weather mark, ‘Who is in the lead?’, the reply was the same.

In fact, there is little to recount by way of report. Lav and O’Brien won the first three races in spectacular style, and needed a minor dinger in the fourth to get an early bath.

Conditions on Saturday were testing, wedged as we were under the new Aviva Stadium. Soft breezes and cool airs mixed with the odd puff and a bit of hiking. Perhaps 16 knots steady, with lulls of sweet nothing and shifts that never came back.

The South Coast Championships were twinned with the Bailey Bowl again, and thankfully the National YC was devoid of previous congestion caused by multi-hulls. We shared our race course with the Squibs, many of whose compliment boated a Northern twang, which made it all the more funny when Rabbit and Michael — one of only three travellers from the north, were wedged out by their brethren.

One turn up was the explosive entrance of the Dooley brothers. Chris, complemented by his former Glen helmsman sibling, lay second overnight. Also making a mark after three races were Frank Burgess and Ciaran Crummey, with the ever-present Brian McKee and Stevie ‘the lips’ Martin up there too.

Ian Matthews has paired up with Keith Poole and they made a pretty tough team, finishing fourth overall. Niall and Nicki commented on their commitment to competitiveness, though it was impossible to determine whether this was done with admiration or hatred. Ben Mulligan was, for the first time in living memory, absent due to the birth of his son. Congratulations to Ben and his wife.

Congratulations also to Dave and Sarah Gorman on their new arrival, a crewman in the making if ever there was one. Dave missed the Saturday due to First Communion commitments. However, he didn’t miss the practice. He had a first and a second on the Sunday. Thanks goodness for First Communion.

While we are in the swing of congratulations, well done to Orla and Peter Lawson, who also have a new arrival. Notes passed through SMS suggest that their boat will bear its transom soon this season, regardless. Congratulations also to Roger Chamberlain and Jason Scammell, and Neil Logan and Barry Bridges. Both couples are expecting a new boat any day now.

The evening antics were uncharacteristically quiet. A rough quartet was spotted heading in lonesome fashion up the Dun Laoghaire hill like a sailmaker’s stitch on Saturday night. The others all had tickets to Leinster/Munster at the RDS.

It is a qualifying year, however there were only 14 boats on Dublin Bay at the weekend. This is the poorest turnout in quite some years, so hopefully more boats will appear at the other events. Well done to John and David on a pretty convincing win. 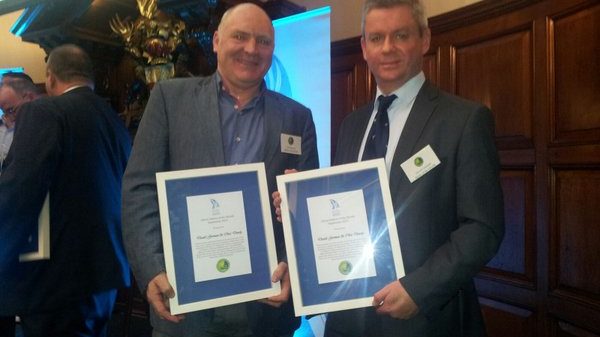 Dave and Chris pick up their Sailor of the Month award 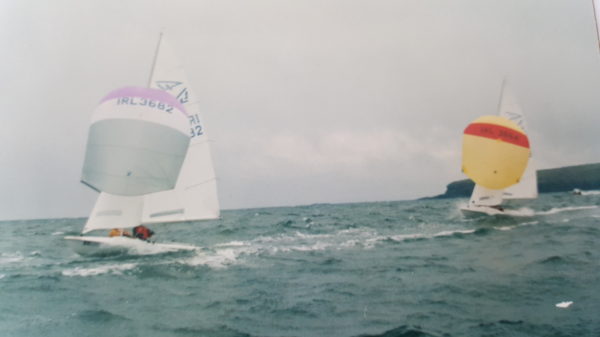 Green sails to third in Europeans 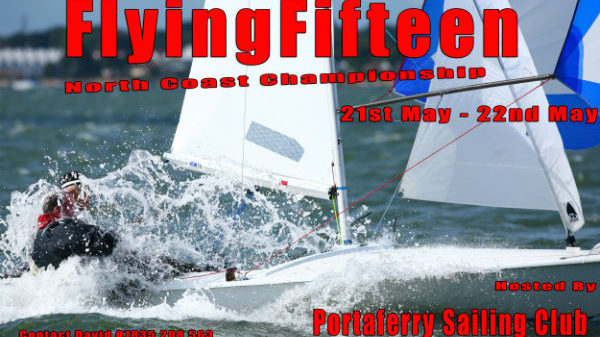