Killyleagh Yacht Club played host to the Southern Championship last weekend, with 24 Flying Fifteens turning out to compete in the five-race championship held on Strangford Lough.  The local fleet of 15 boats were joined by nine visiting yachts, with sailors arriving not only from the National Yacht Club, Dublin Bay, but from Waterford Harbour Sailing Club as well.

Despite a forecast of light winds and cloud, the first race on Saturday started with a bang in strong winds, and Portaferry Sailing Club’s McCarthy and Rodgers in Final Fling romped around the course to take a commanding victory ahead of Logan and Bridges in Fflapping Eagle, who finished second.  Claiming a convincing third were National Yacht Club visitors Mathews and Poole in Gruffalo.

Torrential downpours and massive wind shifts made life hard for race officer David Young and his team but eventually the second race got underway and Killyleagh Yacht Club’s McCleery and Dougan made their mark with a convincing first place.  Strangford Sailing Club sailors claimed second and third place as Gerry Reilly in Over the Moon and Malcolm Crichton in Art Gekko were hot on their heels.

With yet another course change required, race three saw the brother and sister team of Peter Lawson and Jo Bridges in Friggit nip ahead of Crichton’s Art Gekko to take line honours.  National Yacht Club visitor’s Dooley and Hickey in Fflogger finished third, drawing the first day’s racing to a close, but it was the local boats that topped the table with Malcolm Crichton’s Art Gekko the overnight leader, ahead of overall winners McCarthy/Rodgers in Final Fling, and Lawson/Bridges in Friggit.

Sunday’s racing got off to a much finer start with light southerly winds filling in quickly along the Killyleagh shore.  A swap to the Olympic Triangle course configuration suited the stalwart Strangford sailor Gerry Reilly to a tee, and he claimed the first race well ahead of visitors Meagher and Matthews in The Big Bow Wow, with McCleery and Dougan’s 2 Fast’n Furious nipping into third.

With all to play for in the final race, it was a visiting yacht who showed the locals how to do it as Mathews and Poole in Gruffalo nipped across the line in a close finish, pushing the ever-consistent Final Fling into second place, with 2 Fast‘n Furious claiming another third.

In the silver fleet, it was a Strangford Sailing Club victory for Philip and Anna Sandford in No Excuses, with the furthest travelling visitor Hard Currency, from Waterford, under Boland and Paul in second. Lough boats dominated yet again as Curran and Quail in Dreamcatcher made it a Strangford third in the silver fleet.

In the bronze fleet, the National Yacht Club lifted the first and third places which went to Murphy and Marshall in Hi-Fibre and O’Sullivan and Ryan in The Last Resort.  Splitting the difference in second was the evergreen Seamus Byers from Portaferry Sailing Club in Sea U Later.

Despite the sometimes testing conditions, the event was an overall success and many thanks must go to local company Erindar and to Down District Council for their very generous sponsorship.

The overall results were as follows:- 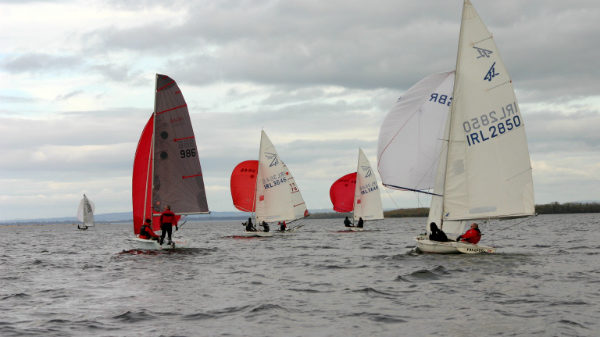